All you need to know about Fortnite (as a parent)

All you need to know about Fortnite (as a parent) description

Available since July 25, 2017, as part of an "early access" and distributed on PC, consoles, and mobile platforms, Fortnite takes the form of a third-person shooter, immersing the player in a post-apocalyptic, colorful world with a very "cartoon" aesthetic.

Fortnite is a free-to-play multiplayer action and combat game, published by Epic Games, in which up to one hundred players compete simultaneously to death, or in groups in tower defense mode.

Originally released in 2017, the game has grown in popularity and has become a staple of online gaming, especially thanks to its free Battle Royale mode inspired by Kinji Fukasaku's film of the same name, in which students isolated on an island are driven to kill each other to the last.

In addition to the Battle Royale, which made it popular, other game modes exist, however only the Battle Royale mode is available on your mobile smartphone and tablet devices (application for Google Android and Apple iOS) and is accessible for free and without ads. 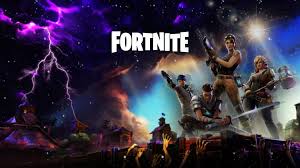 The most famous version of Fortnite, and the one that made its success and millions of downloads, is the Battle Royal. You are dropped on an island from which you cannot escape. The principle is simple: there must be only one left, the last survivor on the battlefield wins. To achieve this, you'll need to collect the best weapons and equipment possible (luck plays a big part in this), build a camp, and form fragile alliances with other players who can break them at any time.

At the bottom of this ultimate goal of being the last one, there is also a threat to escape: a storm is approaching and will shrink the map little by little, taking with it those who would not have advanced far enough towards the specific area defined to escape it (random area).

Thanks to a construction system you can use objects found here and there on the map to help you advance: building stairs, walls, and barricades, etc. This is a feature that few other games of this type offer.

As far as other game modes are concerned, at the moment Fortnite comes in two versions, the Battle Royale, which we just saw, and a cooperative Tower Defense type system called Save the World.

Save the World co-op is a mode in which you and your teammates will have to try to survive attacks from hordes of monsters. It is a game of exploration and survival in teams of four players. The game is sandbox style and allows you to create your weapons, build fortified structures, etc. This game mode is a Tower Defense type of game with construction as the main feature.

Finally, we should note the presence of a particular and rather rare mode: the "creative" mode. In this mode, the player is free to create a new map and change the rules of the game. Create your own game with your own rules! You can then invite your friends, share your creations with other members of the community, etc. All games created by members are then playable by everyone!

To conclude, Fortnite offers a fun gaming experience in a colorful universe with a scenario that changes with each game.

The game allows you to make integrated purchases to obtain passes for the new seasons. The game's internal currency called V-Bucks also allows you to buy items in the store (skins, outfits, etc.). Note that, of course, you can buy V-Bucks.

According to the PEGI classification, Fortnite is not recommended for players under 12 years of age, particularly due to "frequent scenes of moderate violence". If the player is indeed confronted with a hostile environment (a post-apocalyptic universe populated by often frightened survivors) and is regularly brought to face opponents (controlled by other players or by artificial intelligence), the "cartoon" graphics and the fun atmosphere of Fortnite are inclined to de-dramatize this context. We encourage parents to respect these signs.

Furthermore, Fortnite is a multiplayer online game. So it exposes the player to other participants - in the game itself or community streams on social networks. And while Fortnite federates a primarily teenage player population, the game is also frequented by young adults and can expose the player to exchanges of inappropriate language. Besides, Fortnite encourages the player to play over and over again. The amount of time spent playing the game may need to be monitored, as may the amount of time spent streaming games.

It's important to supervise and monitor your teenage children's gaming practices, especially to identify excessive gaming.

If the "Battle Royale" mode of Fortnite is accessible for free, the game nevertheless includes a store that allows players to acquire skins, i.e. cosmetic items (optional) that allow them to modify the appearance of their character or the objects they use.

Often very popular with players, these skins are more or less rare, classified in categories from "uncommon" to "rare", epic, and even legendary. The latter is the most coveted. They can be bought for "V-Bucks", the game's virtual currency. You can earn them by playing the "Save the World" mode (the game's paid mode). But you can also buy them in real currency:

The price of the outfits varies according to their level of rarity. Starting at 800 V-Bucks for the most common ones, that is to say nearly 9€! Then for 1200 V-Bucks, 1500 V-Bucks, even 2000 V-Bucks for the rarest, that is to say about 20€. The store has dozens of outfits and cosmetic items (some players want to collect them all). And the content of the store is regularly renewed. Some skins are only available for sale temporarily.

This encourages players to buy V-Bucks, rather than trying to earn them progressively while playing, at the risk of seeing the coveted skin disappear before having saved enough.

It is therefore important to remain very vigilant about the risk of large expenditures by young players. It is, therefore, necessary to set spending limits.

All you need to know about Fortnite (as a parent) screenshots

All you need to know about Fortnite (as a parent) Keywords