Azir, the Emperor of the Sands, Revealed

Azir, the Emperor of the Sands, Revealed description

Azir is a mage who summons Shuriman soldiers to control the battlefield and basic attack for him.

The soldier’s piercing basic attacks furnish most of Azir’s damage potential, making him an outlier amongst mages as a right-click-focused champion.

Azir’s spells, on the other hand, manipulate his and his soldiers’ positions to keep him safe and establish dangerous no-go zones for his enemies.

Azir establishes shifting zones of power through soldier placement, gaining control of the lane and farming with their assistance.

For instance, a soldier placed near the enemy’s caster minions dares a lane opponent to harass or farm through the piercing spear.

When the opposing laner missteps, Azir commands the attack, repositioning soldiers with Conquering Sands to make the most of the opportunity.

Once a favorable trade or two unlocks kill potential, Azir utilizes Shifting Sands, knocking the enemy champion up and setting himself up to compel a Conquering Sands and finish them off.

When the (ancient) coin is flipped, a quick Arise! and Shifting Sands rushes Azir out of danger.

Add Azir’s ultimate to the mix and the Shuriman leader exercises even more zone control.

To go for the kill, start off with Arise!and Shifting Sands to position Azir behind his opponent.

From there, Emperor’s Divide drives the foe deep into Azir’s side of the map.

Pushed so far into Azir’s territory, the opposing champ’s sure to meet their end at a spear’s tip. If offense proves temporarily unwise, Azir’s ult provides safe passage from a fight, building a wall between Azir and his pursuers.

Teamfights As in lane, as in teamfights:

Azir shines in battles tied to one physical location, where he can safely order his soldiers around and dispatch adversaries from afar. 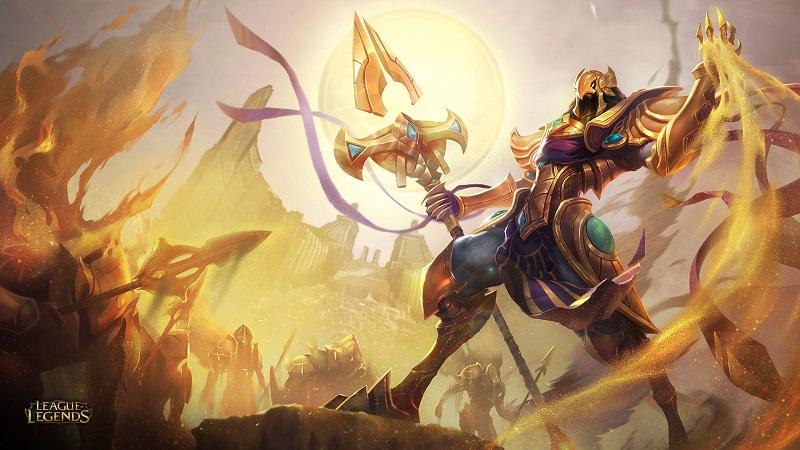 In that vein, Azir dominates Baron and Dragon fights, using his ultimate to lock enemy teams into (or out of) the pits.

If teamfights take a roadtrip, Azir must be judicious with Arise! and Conquering Sands, moving his zone of control along with the combatants. Post-initiation, Azir’s an expert at punishing uncoordinated enemies.

With the baddies split, Azir charges his soldiers in for the kill, pumping out marksman-level sustained damage until none challenge his rule.

Trapped, they’re surely short work for Azir, his soldiers and their allies.

If a fight goes south, Azir reliably disengages with his ultimate or beguiles baddies with Arise! and Shifting Sands, spiriting himself over a jungle wall.

Disc of the Sun doesn’t raise a turret quick enough to be of much use in teamfights, but sieges are a different story.

When attacking enemy inhibitors, Azir can resurrect their inner turret, trapping the enemy team inside their crumbling base and making counter-engages a dangerous proposition.

Conversely, when Azir’s base is under assault, Arise! and Shifting Sands help him jump the base wall and sneak around the siege to rebuild his own inner turret.

Caught between the inhibitor turret and the Sun Disc, the enemy team can either scatter or be crushed. Synergy Works well with: Yasuo - the Unforgiven Picks are easy with this pair:

Azir uses Shifting Sands, knocking up a foe, setting up Yasuo’s Last Breath and positioning himself between the thoroughly-screwed baddie and the rest of the enemy team.

A timely Emperor’s Divide pushes the rest of the enemy team away as Yasuo safely slices and dices.

Kill secured. Sejuani - the Winter’s Wrath When Sejuani crashes into a teamfight, layering Permafrost on an enemy team, she grants Azir all the time and safety he needs to set up soldiers for maximum damage output.

With the speed boost from On the Hunt, Azir and his soldiers can chase down any champs before putting them to the spear.

Azir shouldn’t expect to do much besides stand near his turret and farm against the diminutive demolition expert.

Kassadin - the Void Walker With plentiful mobility and a potent shield, Kassadin’s equipped with tools to work around Azir’s zone-controlling, sustained-damage fighting style and bully him out of lane.

Maokai - the Twisted Treant Azir thrives on his ability to move around fights with Shifting Sands. Between Twisted Advance, Arcane Smash and the damage reduction of Vengeful Maelstrom, Maokai enables his team to lock down and depose the emperor.

Imperial Island: Birth of an Empire

Prodigy of the North: Akatori

Azir, the Emperor of the Sands, Revealed screenshots

Azir, the Emperor of the Sands, Revealed Keywords