League of Legends Tips and Tricks: How to play Tryndamere description

Okay, currently (because of the current season and current jungle), you should prefer to play Tryndamere as solo top rather than jungle. Why? After the jungle camps changed, Tryndamere became a lot weaker in the jungle, and his inability to cheese grew. I honestly also like Tryndamere on the top because of the fact that almost no enemy jungler can gank you without having a problem. You can easily escape with E and slow them down (enemy top laner and jungler) with W and reduce their physical damage (AD). If not good enough, then ensure not to die using R. If you deal enough damage, you could even pull out a 2v1 and get a double kill, or run off with a kill, so yeah, it is hard to gank Tryndamere. So I'd say you stick to top lane with Tryndamere.

Reason why you can usually get Q at level 3 instead of W is because you will usually hit level 4 in no time. Getting Q first will give you an early advantage when harassing. At this point of level 3, you are probably right next to their tower, there is no need for W yet because you will be harassing them on the tower, more damage over debuffing them.

Maxing E over W is pretty easy to understand as you will get lower CD and higher DMG whereas you'd get AD Debuff and slow percantage with W, which is weaker: Lower CD + Damage > AD Debuff & Slow Percentage

Scaling: Tryndamere scales with Attack Speed, so Legend: Alacrity is ideal rune for Tryndamere, this is what his Passive is for. The faster you attack, the more fury you gain, the more damage you have.

Passive: You have 35% crit at 100 Fury (full fury). Because of this passive Tryndamere can deal enormous damage in the early game without others being able to deal that much damage. So try to keep your fury at highest level possible when fighting, to deal more damage.

Q: Use this with caution. Don't just press Q when you run out of HP while in combat, you may find yourself not dealing enough damage (because you lose your fury, thus the damage loss), so Q needs to be used intelligently, actually, this is one of the hardest skills to use with Tryndamere. You must know when it is the good time and when it is the bad time to use it.

E:  This skill is used a lot for taking objectives (such as baron). It is also used for escaping easily after split pushing. And this skills biggest use in the early game is canceling basic attack animation under enemy turret, harassing enemy champion. In the jungle, it is good for clearing a raptor camp.

R:  Take your time. Don't rush with the R, using R too early or too late results in a failure, always... So think it through before using. Try to tower dive a lot, knowing the damage you can deal, and if you can kill the enemy easily, and escape. Surprisingly, you should max Tryndamere's R the last. You will max R on 6, 17, 18 levels. Maxing other spells is much more efficient.

Cancel basic attack animation with E: This is widely used for harassing enemies under turret, when full fury, you can get a strong basic attack on the enemy + the damage from E while they are under turret, and your E will help you escape the turret shot, try to use this as much as possible.

E + Flash: This is one of the best and easiest tricks, you can use this to surprise enemies, and it increases your range, so you can easily delete their ADC in a team fight this way. It gives almost no reaction time to the enemy top laner if they are low health. This can also be used to dodge skills and CC, say you're chasing a Jinx, she puts the bombs(Jinx E) on the ground, you E and then flash just when you were about to hit the bombs(Jinx E), this will result in you hitting Jinx with your E damage and avoiding the CC by the bombs(Jinx E).

E for leveling up to level 2: This is a pretty good trick to tower dive (one shot tower dive) your enemy without them expecting you to be level 2. You wait until you are full fury, and just a little XP off level 2, and spin through a minion toward your enemy to get the XP and get closer to them, you unlock Q and basic attack your enemy once, if the enemy is low enough on the HP you can ignite (if you have ignite) or if not, you can flash basic attack, and then heal with Q avoiding death from the turret shot.

R while Teleporting: If you are low HP and you know you can't escape the enemy, even if you ult (an enemy like Master Yi with high mobility), you can TP to turret in your base, and press R in order not to die. Tryndamere can R while Teleporting, this is very cool trick. If you know your enemy's CCs are on CD, or if the enemy has none, you can use this very efficiently.

Annoying Enemies: There is a well known BM with Tryndamere that looks quite cool and can annoy enemies, even surprise them usually the ones in the lower elo. Okay so, you bind your laugh (CTRL + 4) to C key. And when you cast your E (your spinning ability), your press C, and the animation will be canceled, you will be walking forward dealing damage without the spinning animation.

Be cautious in the early game: Early game with Tryndamere is somewhat risky, if you fail in early game, you  will have a hard time returning to the game, and you will  be bullied. So you should consider you actions and always watch for a gank by the enemy jungler, and do not be greedy, risking to die in early game because of greediness is a big mistake a lot of low elo players do.

Stay in the lane rather than roam, Trynda is a bad roamer: Tryndamere only has one soft-CC which is his W, and he is not a good roamer. You should try to stay in lane and farm as much as possible, and push, also trying to tower dive your opponent getting a kill. Tryndamere is much like Nasus, in the mid and late game you should try to split push in 99% cases. Tryndamere is very good for split pushing and no matter what your teammates say, you should just try to split push in majority of the cases. Although there are cases when you do need to attend to team fights, which one of those is, only you being fed in your team, and only you being able to deal damage, then, if you leave your team 4v5 and try to split push, you may find that you're the only one standing alive, and that the enemies are pushing the other lanes faster than you, as your team had no chance in the team fight.

Fake dive: This works almost always in low elo (Bronze/Silver/Gold) where you act as if you were to dive, and approach towards enemy and enemy turret (while you have your minions there), and the enemy will probably cast all their CCs to try to stun you, because they thought you would dive in. That way you waste your enemy's CCs and just walk away, regenerating, and preparing yourself for a real dive, in which they can't use their CCs anymore (Malphite R or Malzahar R is an example).

Steal enemy jungle:  If you push your lane too much, and you can't really fight your opponent at the turret or you just find the spare time, you should steal the enemy jungle, it both helps your team, makes the game harder for their jungle, and you get XP and gold. This can't be done with just any champion, but because Tryndamere has heal from his Q skill, it helps him not to lose much HP while doing this.

In the early game, dependent on your opponent, you may chose Doran's Blade or Doran's Shield. Later on, you'd build up Tiamat, following with Berserker's Greaves and Phantom Dancer (remember, Tryndamere scales with Attack Speed!!!). Into the late game, you'd want to have Essence Reaver, Guinsoo's Rageblade, Ravenous Hydra and Infinity Edge (and your boots of course). It is a good idea to choose the last item to be one of these: Black Cleaver, Maw of Malmortius, Death's Dance or Mercurial Scimitar. Of course the build may vary depending on the enemies, but this is the most standard build in any elo for Tryndamere.

As of runes, it is simple, you take:

Opponents and the difficulties to play against them:

If you have any objections or suggestions, feel free to share it with us in the comment section! 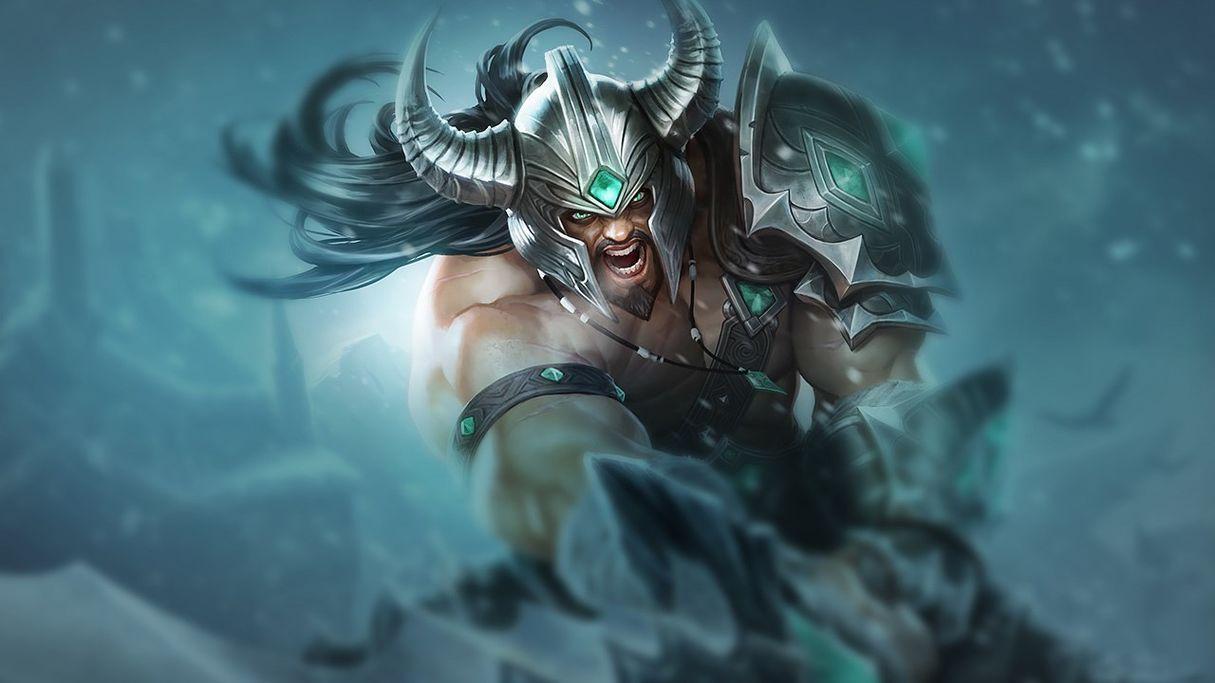 League of Legends Tips and Tricks: How to play Tryndamere screenshots

League of Legends Tips and Tricks: How to play Tryndamere Keywords